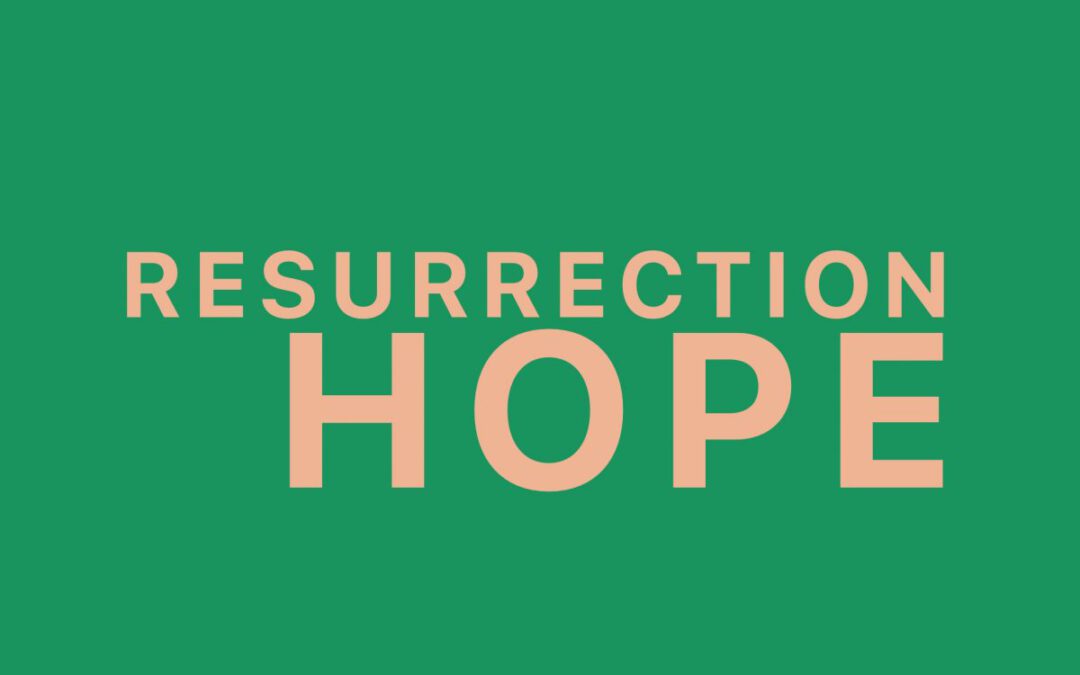 If you missed our Easter service, you can listen to the podcast here or check out the transcript from pastor Luke’s sermon below! We had such a great gathering and thank everyone for joining us!

Easter has become a pretty commercialized holiday. Over the years, the Easter message about Jesus’ physical resurrection has transformed into a watered down inspirational thought about spring! Yet in 1 Corinthians 15:1-7, 14, 17, the Apostle Paul states that the Easter message is the foundation to the good news of the kingdom of God. It’s the fact that Jesus died for our sins and was raised from the dead which grounds our faith. This is why I believe that the physical, tangible resurrection of Jesus matters. For without the Resurrection, Paul says that we are wasting our time:

“And if Christ has not been raised, then all our preaching is useless, and your faith is useless.” (1 Corinthians 15:14 NLT)

For these reasons, today’s message is called, “Resurrection Hope,” because Jesus’ resurrection 2000 years ago has great impact on today’s world. As one theologian states:

“Believing in the resurrection does not just mean assenting to a dogma and noting a historical fact. It means participating in this creative act of God’s … Resurrection is not a consoling opium, soothing us with the promise of a better world in the hereafter. It is the energy for a rebirth of this life. The hope doesn’t point to another world. It is focused on the redemption of this one.” ― Jürgen Moltmann

Some people have suggested that the Resurrection was something of an April Fool’s joke. Or that Jesus’ body was stolen from the empty tomb (even though the tomb was guarded by soldiers who would lose their lives if they failed to prevent people from raiding Jesus’ tomb). Or some have suggested that it was just a story that was made up and there was no historical evidence to support the idea that Jesus is alive.

By the way, if you are looking for good books documenting the evidence for the resurrection, might I suggest four books:

But you aren’t here for a book review, so I digress and will refrain from the nerd-out. My point is that we have very good supporting historical evidence that leads us to the conclusion that, yes, Jesus is, in fact, alive… and that tomb is, in fact, empty.

You see, no one denies that Jesus lived or that Jesus was crucified. Virtually every historian and scholar acknowledge that about 2000 years ago a Jewish man named Jesus was sentenced a criminal’s death and was nailed to a cross and killed and then buried in a tomb. There’s no disagreement there. The challenges comes from the resurrection. Did Jesus rise from the dead or not?

And Christians have taught that Jesus’ death was for our sins as he took our place:

“I passed on to you what was most important and what had also been passed on to me. Christ died for our sins, just as the Scriptures said.” (1 Corinthians 15:3 NLT)

But Paul does not stop at the cross. He goes on to write,

“He was buried, and he was raised from the dead on the third day, just as the Scriptures said. He was seen by Peter and then by the Twelve. After that, he was seen by more than 500 of his followers at one time, most of whom are still alive, though some have died. Then he was seen by James and later by all the apostles.” (1 Corinthians 15:4-7 NLT)

This is a significant personal reason why the Resurrection matters: the Holy Spirit raised Christ from the dead and the same Spirit that raised Jesus from the grave lives in Jesus’ followers and will raise them from the dead too. Easter is really about the spirit of new creation. By Christ’s death on the cross and resurrection, we are invited to participated in his new creation… where the kingdom of God comes into our world and makes all that is wrong, right.

You see, while Jesus is the center of the Easter story, we have to realize that Jesus’ life teaches us about the love of our heavenly Father. For God loved us so much that he gave his one and only Son. God doesn’t give us fragments or pieces of his love; he doesn’t reserve or constrain his love for us – He gives it all!

And in Easter, we also see the work of the Holy Spirit, powerfully raising the Son of God from the grave (side note: this is why we’re going to spend the next 8 weeks in a sermon series on the Holy Spirit as we move toward Pentecost).

So while we remember and celebrate the Resurrection of Jesus, we also participate in his resurrection, both now (through the Holy Spirit) and in the future (when we receive the fullness of God’s kingdom).

“Believing in Christ’s resurrection therefore does not mean affirming a fact. It means being possessed by the life-giving Spirit and participating in the powers of the age to come.” ― Jürgen Moltmann

Now this message may simply reinforces the hope that you already have in the risen Christ. If so that’s so great!

But if you’ve never really considered the implications of the true Easter message – that Jesus literally was raised from the dead by the Holy Spirit… the same Spirit that invites us to join Jesus, I pray you do today! I’m convinced that the Resurrection changes everything.

So why not make a decision today to live your life in light of the Resurrection. The Resurrection is central to our salvation experience (cf. Rom. 10:9-10). The One whom we seek salvation from is alive. Let’s pray… (pray).

We’d love to have you join us next Sunday as we learn more about who the Holy Spirit is! May the grace and love of God be with you all!